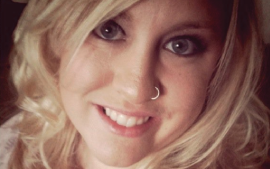 A version of this article originally appeared at NucleusHealth.com.

Kelly McCulloch is a music teacher, but she says the most beautiful sound she’s ever heard is her own heartbeat – once she actually had one. Before her aortic valve replacement, McCulloch’s heart didn’t exactly beat. It sloshed.

McCulloch was born with a partial blockage of her aortic valve. She always knew she’d need surgery one day. It was just a question of when. When she was four, a procedure to open the valve helped delay surgery but also tore the valve causing it to leak.

“The blood just sloshed back and forth, so I didn’t have a real heartbeat. It sounded like an ocean wave,” McCulloch said. At 29, she couldn’t wait any longer to have the valve replaced. But she was afraid. So she did what many people do: she turned to social media for answers and support. “I found my job using social media, I found my fiancée using social media, so it just seemed second nature to use it for my health.”

McCulloch joined support groups and contributed to discussion boards. She learned everything she could about the procedure, the risks, recovery and drug interactions, and she built a support community with people she now calls friends. She also searched YouTube for educational videos depicting aortic valve replacement. Watching every video that the search returned, McCulloch liked Nucleus Medical Media’s 3D animation best. She watched the video again and again, becoming more familiar with both the procedure and her own anatomy.

“The animation isolates the area where the procedure will be performed, like a diagram in a poster, but it’s moving, so you can follow the procedure and actually understand what’s happening,” she said. “The narration was straightforward but scientific. It wasn’t dumbed down, but it wasn’t so technical that I couldn’t understand it.” The patient education video helped change McCulloch’s attitude, as she described it, from irrational fear to scientific logic. “Watching it forced me to look at it from a scientific perspective,” she said. “I saw it as something that needs to be done. It was for my health, and there’s a high success rate. Even though it’s a big deal to me, surgeons do this procedure every day.”

McCulloch also preferred the animated video to videos of actual surgeries. “There are videos where they cut open an actual person, but I didn’t like those as much because they would point to something and say, ‘You can see that the left ventricle is enlarged,’ but it’s hard to really see it from that perspective.”

Ken Bearden, Director of Integrated Marketing Communications at Detroit Medical Center, told us “animation is a powerful way to help non-medical professionals grasp the intricacies of modern medical technology, as well as those of the human body itself.” Detroit Medical Center uses Nucleus animations.

Repeatedly visiting the animated video on YouTube, McCulloch posted comments underneath it and replied to others. Many times she shared her own story with others who were experiencing the same thing. “Sharing my story put my mind at ease. And participating in discussions and reading other people’s stories helps,” she said. “Social media helps me be pro-active and an advocate for my own health, and it helps me understand that I’m not the only person who’s had to deal with this. If there are answers for them, there are going to be answers for me. I really do believe in the power of social media to help people from day to day.”

One thought on “Heart Patient Reassured by Patient Education Video”