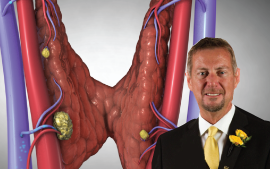 Physician calls investment in video “one of the most important business decisions we have ever made.”

Jim Norman, MD, is one of the world’s leading experts on parathyroid disease. He and his team perform around 3,400 parathyroid surgeries per year at the Norman Parathyroid Center in Florida. Dr. Norman is also a Nucleus customer and a big believer in using animation to educate his patients. Since 2012, he has used animation one-on-one with his patients, as well as on his YouTube channel and his website, and has seen great results. We sat down with Dr. Norman and asked him a few questions:

Dr. Norman, what made you decide to use custom medical animation for patient education?

Our practice is limited to parathyroid surgery only, but that’s a challenge when 99% of people don’t even know they have parathyroid glands. We operate on things that nobody has ever heard of! Thus, one of the biggest tasks we face is educating patients (and to a lesser degree, physicians) on everything about parathyroid glands and hyperparathyroidism in 5 minutes or less.

We had to start with the most basic concept—we all have four parathyroid glands, and parathyroid glands are the regulators of calcium metabolism. We had to help them understand the central importance calcium plays into our overall health and how we feel. From there we needed to introduce the concept that one of those little parathyroid glands could become a tumor. The next complex concept to teach was how a small parathyroid gland tumor in the neck can cause terrible problems in distant places throughout the body; with the bones, the heart, the kidneys, the nervous system, etc.  It is a novel and complex issue for many people to grasp quickly that a little gland in their neck (that they didn’t know they had) is why they have lost the joy of life and their body is falling apart.

We have been explaining this with pictures and words for years, and have even included videos of me discussing hyperparathyroidism during a lecture. But we needed something more—something that did the teaching for us. Something that made our message clear. We needed a video that followed the development of a parathyroid tumor in the neck: it needed to cover the tumor producing too much parathyroid hormone and releasing calcium out of the bones, as well as following that calcium to other organs of the body and showing how it caused havoc.

I went to Nucleus Medical Media a few years ago with this challenge: to make a 5 minute video that would take a complete medical novice to the point that they understood why they have depression, fatigue, osteoporosis, and kidney stones and that surgery to remove a small parathyroid tumor in their neck was the only option. Nucleus came through in an amazing way and the final product speaks for itself.

We embedded our video on our website (parathyroid.com) but we decided to put it on YouTube because it is the number 2 search engine behind Google. Over time, people have become more and more accustomed to learning via videos. YouTube is the world’s repository of videos, and any business that is customer facing should have their videos online.

Can you tell us about the success you’ve had using animation?

We are by far the world’s leaders in parathyroid surgery. A second-rate video would not be helpful—in fact, a poorly done video could have reflected poorly on us as a company and as experts in this field of medicine. The final product from Nucleus has been an overwhelming success. It has been translated into 5 languages (English, Spanish, French, Portuguese, and Chinese), and each of those videos is the most popular video for the “parathyroid” family of search terms. The extremely well done animation tells a story that allow patients to understand their complex medical problem and proceed with confidence.

Obviously, we are educating hundreds of thousands of patients per year world-wide—and thus helping them with their health issues—without ever meeting them. But when some of these patients do decide to come to Tampa, Florida to have us operate on them, every aspect of the encounter is easier and smoother because they have watched the video and they understand what is going on. Producing this video with Nucleus is one of the most important business decisions we have ever made.

What’s next? Do you have plans for using more medical animations in the future?

We’re going bigger and better! We are very excited to be working with the Nucleus Medical Media team again on a completely new and very exciting project with our sister website (thyroidcancer.com) and the Clayman Thyroid Cancer Center. We’re asking the Nucleus team to do what has never been done before: developing 3D modeling of a thyroid gland that is completely customizable within a mobile app.

The technological as well as anatomical challenges of making this concept come alive on a mobile platform were met with enthusiasm and dedication from the Nucleus team and the app developer, Haneke Design (hanekedesign.com). Within this free-download app, users will be able to enter their thyroid ultrasound results and watch as a 3D rendering of their thyroid appears, showing all the nodules and potential cancers. The app and its 3D rendering can even predict what the patient’s thyroid will look like in the future and help advise on which nodules should be ignored, biopsied, or even removed. We expect our release of the “Clayman Thyroid3D” mobile app to be around April 2017 and it will once again show how medical animations can have a huge impact on both our business and in the lives of hundreds of thousands of people.